SEC. 30. No person shall be excused, on the ground that it may tend to incriminate him or subject him to a penalty or forfeiture, from attending and testifying, or producing books, papers, documents, and other evidence in obedience to a subpoena of any court in any suit or proceeding based upon or growing out of any alleged violation of this Act; but no natural person shall be prosecuted or subjected to any penalty or forfeiture for or on account of any transaction, matter, or thing as to which, in obedience to a subpoena and under oath, he may so testify or produce evidence, but no person shall be exempt from prosecution and punishment for perjury committed in so testifying.

These Sections of Part 2 use "person" to mean individual or corporation. Both can be coerced and the Fifth Amendment is effectively suspended except as a reward exempting a "natural person" from penalties in exchange for becoming an informant against other targets of allegations. The Constitutional rights enumerated in the 4th and 5th Amendments [The right of the people to be secure in their persons, houses, papers, and effects, against unreasonable searches and seizures, shall not be violated...; nor shall be compelled in any criminal case to be a witness against himself...] are declared alienable privileges to be dangled as bait to gull people into helping agents to rob gangs organized largely by "former" or off-duty cops. Still, perjury charges can be brought against "artificial person" corporations (which can neither be jailed or killed in reprisals) and hapless individuals who recalled once having had inalienable rights.

Here we are homing in on the lessons in Vices are Not Crimes by Lysander Spooner.(link) Spooner noted that the meddlesome habit of declaring that vices are crimes and demanding deadly force solutions are often advanced on economic grounds: that making trade and production into crimes makes prosperity. Spooner asks, then, of the causes of the Depression which the Panic of 1873 anticipated back when Comstockism made the postal monopoly into a way to criminalize birth control information, meddle in trade and censor mail.(link)

Was it their vices that turned the adult portion of those 20 millions out of doors without employment, compelled them to consume their little accumulations, if they had any, and then to become beggars—beggars for work, and, failing in this, beggars for bread? Was it their vices that, all at once, and without warning, filled the homes of so many of them with want, misery, sickness, and death? No. Clearly it was neither the drunkenness, nor any other vices, of these laboring people, that brought upon them all this ruin and wretchedness. And if it was not, what was it?

This is the problem that must be answered; for it is one that is repeatedly occurring and constantly before us and that cannot be put aside.

There you have the first inkling that the American crashes, crashes that occurred after China banned opium and was then attacked by British dope sellers and their government, might be causally related.

Good Listening: The Darcy Gerow Podcast featured Tim Moen, former "Leader" of the Libertarian Party of Canada, struggling and stammering for a pretext to send men with guns to force Canadian women into the involuntary labor of reproduction. With "libertarians" like these, who needs fascists? (link) 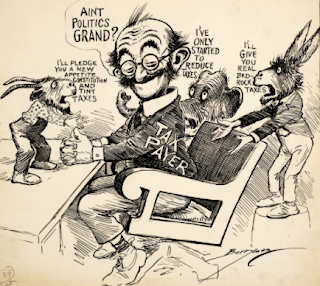