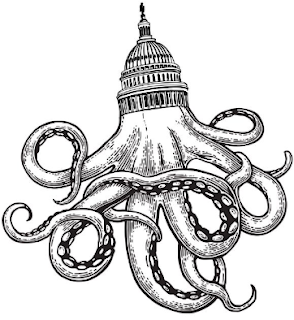 SEC. 4. The United States attorney for the district where such nuisance as is defined in this Act exists, or any officer designated by him or the Attorney General of the United States, may prosecute a suit in equity in the name of the United States to abate and enjoin the same. Actions in equity to enjoin and abate such nuisances may be brought in any court having jurisdiction to hear and determine equity causes. The jurisdiction of the courts of the United States under this section shall be concurrent with that of the courts of the several States. If it be made to appear by affidavit, or other evidence under oath, to the satisfaction of the court, or judge in vacation, that the nuisance complained of exists, a temporary writ of injunction shall forthwith issue restraining the defendant or defendants from conducting or permitting the continuance of such nuisance until the conclusion of the trial. Where a temporary injunction is prayed for, the court may issue an order restraining the defendants and all other persons from removing or in any way interfering with the liquor or fixtures, or other things used in connection with the violation constituting the nuisance. No bond shall be required as a condition for making any order or issuing any writ of injunction under this Act. If the court shall find the property involved was being unlawfully used as aforesaid at or about the time alleged in the petition, the court shall order that no liquors shall be manufactured, sold, bartered, or stored in such room, house, building, boat, vehicle, structure, or places of any kind, for a period of not exceeding one year, or during the war and the period of demobilization. Whenever an action to enjoin a nuisance shall have been brought pursuant to the provisions of this Act, if the owner, lessee, tenant, or occupant appears and pays all costs of the proceedings and files a bond, with sureties to be approved by the clerk of the court in which the action is brought, in the liquidated sum of not less than $500 nor more than $1,000, conditioned that he will immediately abate said nuisance conditions, and prevent the same from being established or kept therein a period of one year thereafter, or during the war and period of demobilization, the court, or in vacation the judge, may, if satisfied of his good faith, direct by appropriate order that the property, if already closed or held under the order of abatement, be delivered to said owner, and said order of abatement canceled, so far as the same may relate to said property; or if said bond be given and costs therein paid before judgment on an order of abatement, the action shall be thereby abated as to said room, house, building, boat, vehicle, structure, or place only. The release of the property under the provisions of this section shall not release it from any judgement, lien, penalty, or liability to which it may be subject by law. In the case of the violation of any injunction, temporary or permanent, granted pursuant to the provisions of this Title, the court, or in vacation a judge thereof, may summarily try and punish the defendant. The proceedings for punishment for contempt shall be commenced by filing with the clerk of the court from which such injunction issued information under oath setting out the alleged facts constituting the violation, whereupon the court or judge shall forthwith cause a warrant to issue under which the defendant shall be arrested. The trial may be had upon affidavits, or either party may demand the production and oral examination of the witnesses. Any person found guilty of contempt under the provisions of this section shall be punished by a fine of not less than $500 nor more than $1,000, or by imprisonment of not less than thirty days nor more than twelve months, or by both fine and imprisonment.
*** 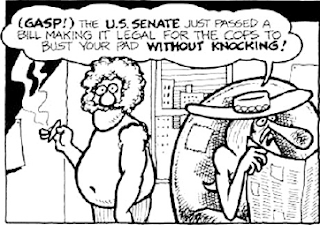 Section 4 admits "good faith" hearsay evidence or the sort that to this day allows no-knock gangs to break, enter and murder people under color of law, then evade prosecution under "qualified immunity" jurisprudence. Dry fanatics chipped away at the Bill of Rights by nullifying the Sixth Amendment right to trial by jury, and the Supreme Court upheld this in 1930.(link) To deflect criticism of this blatant violation of an enumerated right, any tempted to dare to question the usurpation were threatened with a contempt finding of a year in jail and a fine equivalent to from 24 to 48 ounces of gold which today cost from $46,000 to $92,000. Observe in the 6A footnotes that after Quaker President Hoover's Court transubstantiated violation into Constitutional jurisprudence in Patton v. U.S., the next series of violent assaults on the 6th Amendment occurred during Quaker President Nixon's "war on drugs" Administration.(link) That was when plant seeds, twigs and roots, cacti, mushrooms and trace entheogens were branded as felonies by a second wave of coercive superstition and pseudoscience. Masquerading as law and upheld by government-licensed medical practitioners zealous to retain their licenses, Biden's Anti Drug Abuse Act of 1986 triggered the Crash of 1987 as the harbinger of the recession of 1992. That economic wreckage was brought on by the violence of Reagan-Biden-Bush Prohibitionist laws bristling with asset forfeiture provisions.  Laws that criminalize trade and production while legalizing theft and violence are hard on a fractional-reserve banking system.